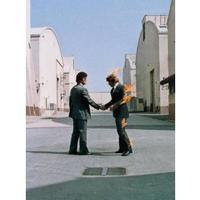 Our good friends at Analogue Productions have pulled the coup of the century (thus far) with the announcement of a forthcoming SACD pressing of the Pink Floyd classic Wish You Were Here, scheduled for release in November. And of course, like the rest of the APO SACD catalog, we WILL have it here at Puretone Audio!

Wish You Were Here is a multitrack masterpiece. Now, to have it mixed for 5.1 surround sound from the original analog master tapes by Pink Floyd's Producer/Engineer James Guthrie is, well, pretty damn exciting.

Is this the biggest SACD reissue in the history of the format? Time will tell, but don't bet against it.

Wish You Were Here(?) Now you can be. Total lifelike recreation of a chart-topping, pioneering, way-ahead-of-its-time blockbuster.

You talk about a title made for multichannel SACD! It's as if they knew 35 years ago that this format would be available. Finally, technology caught up with Pink Floyd. And oh how lucky we all are to still be around to hear this legendary studio recording in its full potential.

Pink Floyd chose Acoustic Sounds and Analogue Productions to handle the exclusive production and distribution of this monumental SACD and we are honored and thrilled to be a part of EMI's huge Why Pink Floyd...? campaign that includes remastered CDs, Blue-rays, DVDs, LPs, memorabilia box sets and this, the first-ever multichannel presentation of Wish You Were Here.

On its release in 1975 Wish You Were Here topped the album charts in both the UK and the U.S. Reflecting the band's thoughts of the time on the music business and exploring themes of absence, Wish You Were Here contains the classic cut "Shine On You Crazy Diamond," a tribute to founding band member Syd Barrett.

In fact, Barrett, who'd long been absent from the lives of Pink Floyd's band members, stopped by the Wish You Were Here recording sessions at London's Abbey Road Studios unannounced. The reunion - with Barrett reportedly appearing in poor mental condition - is said to have been an emotionally stirring event for the band, and apparently that encounter would be the last any of the band members were ever to see of Barrett, who died in 2006.

As they did with their previous release, Dark Side of the Moon, Pink Floyd made great use of studio effects for this, their ninth album overall. The record's winding soundscapes are perfect for the canvas of multichannel SACD. Spacious and airy, the record breathes like a living being.

Wish You Were Here was selected by Rolling Stone as No. 209 on their list of "The 500 Greatest Albums of All Time". And that's before they heard it like this!

Posted by Puretone Audio at 1:35 PM