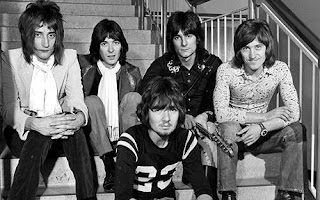 "We were staying at Holiday Inns as they were usually clean and dependable, but ultimately extremely boring and soul-destroying homes from home. The monotony got to everybody after a time. It was not possible to walk into the identical room in twenty different cities without wanting to hurt it, just a little. If there was anything built to be destroyed, it was the two-storey, motel model Holiday Inn."


- The Faces keyboardist Ian McLagan on life on the road in the 1970s United States. The band recently announced they would be touring again, with a surprise lead singer, Mick Hucknall of Simply Red and bass player, ex-Sex Pistol Glen Matlock. On the tour itinerary is an appearance at the prestigious Goodwood Festival, one of my favorite events in the world.
Posted by Puretone Audio at 11:27 AM