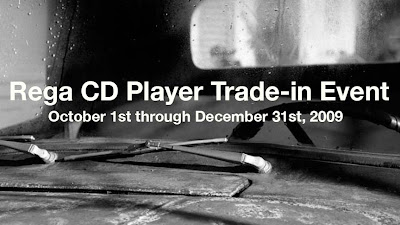 LITCHFIELD, Conn. _ If you have been waiting for the right time to pick up the highly-rated Rega Saturn or Rega Apollo CD player, now is the time to act.

And you don't have to give us your car to get it.

For a limited time, Rega's stateside distributor The Sound Organisation and Puretone Audio have teamed up for the innovative Rega Ca$h for CD Clunkers program.

Just carry, cart or tow in that old digital clunker of a CD player and get a spanking new Rega player at a VERY special price - the superlative Rega Saturn ($2395 list price) will be priced at 25% off - just $1795, while Rega's category killer Apollo CD player ($995 list) will now be reduced 15% to $845. Both black and silver finishes will be available, but (in best Billy Mays voice) YOU MUST ACT NOW!

The Saturn excels in replicating the interweaving of music lines, the correct timing of the entrance of instruments, and the sudden and often unexpected inspiration of the players in the process of making music. You sense that inner communication of the players that makes listening to good music such an exciting adventure and such a satisfying experience. With the Saturn you always catch the band on a good night.

In the sub-$1000 CD player market, the Rega Apollo has reigned supreme since it's introduction. Stereophile's Art Dudley said:


From day one, the Apollo endeared itself to me—no other word for it—by cheaply doing well a great many things I consider crucial to music playback. Its rhythmic performance was strong—no surprise there, given that none of the Rega products I've heard have made music sound sluggish or unengaging—and its frequency range was well extended in both directions, with good balance between its strong bass registers and crisp, open-sounding trebles....

But it was the cleanness of the Apollo's sound that most impressed me that first day. In that sense, the Apollo was audibly, obviously different from most other players...

The Rega had an unambiguously lower noise floor. Through the Apollo, there was more emptiness between the notes—spaces had been filled with texture through the Sony, which I'd never noticed before. Consequently (or so it seemed), listening to the music was now easier: The tension that belonged in the music was still there, but the stress of listening to it was gone.

So call or email Puretone Audio today and drive on out with something better than gas mileage - a sweet sounding Rega CD player.
Posted by Puretone Audio at 8:21 PM