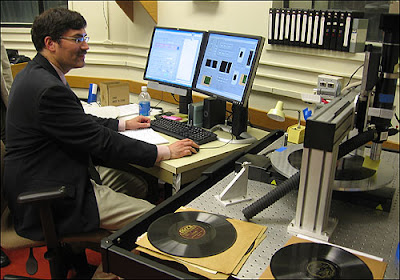 Interesting article on record preservation efforts at the Library of Congress from the NPR site...

Morning Edition, July 16, 2007 · At the Library of Congress, in a small, white room with bright red carpet, physicist Carl Haber sits down to play a record from 1930. It's a recording of Gilbert and Sullivan's "Iolanthe." But here's the strange thing: This record is broken.

"It looks like somebody just got hungry and took a bite out of it," says Haber. He has positioned the record on a turntable and fitted the broken piece back into place, like it's a jigsaw puzzle. "If we spun this thing fast, the piece would come flying off, you know, and maybe hit somebody," he says.

But this turntable doesn't spin like a normal record player. And there's no needle hovering over the record. Instead, there's a camera linked to a computer. It snaps detailed images of the groove cut into the disc, and uses the images to reconstruct the sound without ever touching the record.

article continues here
Posted by Puretone Audio at 8:48 AM No comments: