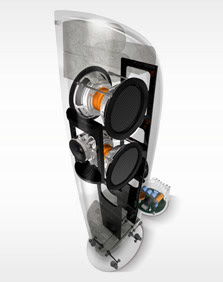 Concept cars are one of the primary tools that auto companies use to market and infuse a design ethic into their product lines, with the introduction of the Muon concept in 2007, KEF showed the same acute sense of branding excitement into an existing product line. Now for 2009, the next generation of KEF concept speakers has been unveiled.

Of course, while the Concept Blade is not for sale, it's design and principles are expected to take form in the existing KEF speaker line, including the KEF XQ20 which has been compiling rave reviews, well, everywhere!

In loudspeaker engineering as in everything else, true innovation sometimes requires rethinking a problem from first principles. So when we set out to create the Concept Blade, our acoustic research department had complete freedom to explore radical new options. No preconceptions or aesthetic restrictions, and no reliance on existing components.

After three years of exhaustive testing and analysis of traditional as well as experimental approaches to loudspeaker design, they perfected a combination of technologies that generates an extraordinarily pure sound.

Concept Blade is forged from these technologies. Its exceptional acoustic integrity derives from the fact that every element of the system has been conceived to perform as a single coherent unit with all parts working in flawless harmony. The highest quality components and advanced materials have been used in perfecting the design.

While the technologies incorporated into the design are often very complex, the focus has always been on simplicity. The drivers are specifically designed to behave with zero break-up or resonance over their frequency range, and the distinctive cabinet is carefully engineered not to interfere with the purity of their output.

Read on download PDF here…
Posted by Puretone Audio at 6:06 PM No comments: