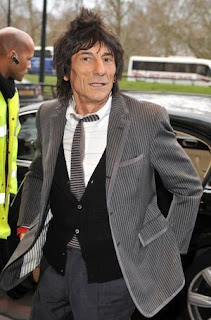 (just had to take time out from the usual audio babble to report this!)

The previously rumored Faces reunion is apparently on, as Contact Music is reporting (via a report in The Sun) that the band have completed an album of new material, and are planning to hit the road this summer with original members Rod Stewart, Ron Wood, Kenney Jones, Ian McLagan all signed on to tour. The band reportedly recorded the album in Costa Rica, Bermuda, and Miami. There's no word on when the tour will start, or when the album will be out, so all of this is still tentative.

“We just have to sort out when and where and drop all of the management egos and just do what we can. We know we can do it. It’s just a matter of getting everyone’s availability sometime next year,” Wood said.

Now that we've cleared up Flea's non-involvement with The Faces, the situation betweenold mates Rod Stewart and Ronnie Wood remains murky. Published reports last year confirmed that the two had agreed to reform the band.

Today, however, a spokesman for Stewart told Billboard that the singer claims "there are no plans for a Faces reunion next year."

and Mac chimes in:

"The rehearsals were a lot of fun, everybody was in fine form, but nothing's happened since November. Don't believe anything you read about an album in the works,
or a tour being planned until you read it here, because this page is bullshit free. I kid you not. I'll be happy to announce good news, or any news, if and when there
is some.

Okay so it's back to listening to the Faces box set and keeping the fingers crossed then...
Posted by Puretone Audio at 6:22 PM No comments: