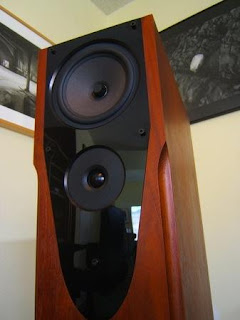 The selection of speakers is perhaps the most crucial element to any sound system, and should be carefully considered with a complimentary amplifier to maximize the sonics of both elements.

Too much speaker and not enough amplifier will leave a system sounding weak and brittle, with an inability to separate the dynamic range. Too little speaker will often lead to a system favoring a treble response, with accompanying shrillness threatening to drown what could often be otherwise sound choices.

We recommend the Rega R7 speakers ($2995) as a great match to tube amplifiers like the Cayin A-100T. These fabulous-looking speakers (shown here in the rosenut color option) compliment the Cayin's valve-powered dynamics in the quest for an accurate soundstage, both in timing and timbre, and ability to navigate the sometimes treacherous dynamic range between sweet, melodious highs and powerful seismic lows.

The R7 relies on Rega’s in-house built drivers that are built to a tolerance level that minimizes the need for crossover correction. Rega utilizes an ultra-efficient design that does not require a huge power amplifier, much less the overkill of trillion-watt monoblock pairs. The lower octaves are sing forth effortlessly when called upon, with the mid and upper ranges capable with an at times breathtaking naturalness. Space and depth create a dynamic dimensional soundstage that fills the room like a band playing in the corner.

Construction of the R7 is superb, with the design of a relatively narrow though stylish front face, with magnetically-mounted front screens to the side-mounted bass driver, earning good ergonomic points as well. Beautiful ridged contours on the upper cabinet contribute to an art deco aura, while the purposeful and rock solid base speak to the highly-engineered nature of the R7. Unlike some other modern speakers, the Regas don't look like escapees from the Lucasfilm prop room.

Also purposeful is a distinct lack of corpulence compared to other speakers in the same price range, at under 40 lbs. apiece, maneuvering and placement for maximum sonic effect is no longer a backbreaking and chiropractor inducing chore.