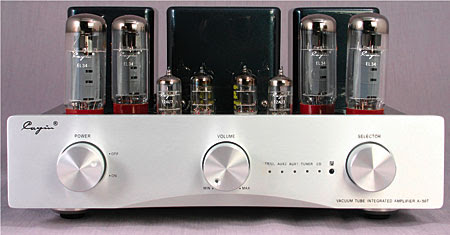 Late in 2006, I was watching John Atkinson set up a pair of DPA cardioid microphones in front of the stage of New York City's Otto's Shrunken Head to record a performance of my jazz quartet, Attention Screen (footnote 1). Before the first set, Wes Phillips approached me. "Bob, I found a piece of equipment you must review—the Cayin A-50T integrated amp. It's only 1300 bucks and you'll love it!"

In the two decades I've known Wes, I've learned to trust his hearing acuity and taste in equipment, but I've also learned that he rarely raves openly about a piece of gear, let alone an affordable one. So I gave Cayin importer Steve Leung, of VAS Industries, a call.

Design
The Cayin A-50T ($1395) is an integrated amplifier with two push-pull pairs of Mullard EL34 tubes that can be operated in 35Wpc Ultralinear or 16Wpc Triode, the modes switchable via the included remote control. The A-50T features point-to-point wiring, a toroidal power transformer, and two EI audio output transformers, all specially manufactured for Cayin in an attempt to achieve low magnetic leakage, wide frequency response, and low impedance. The amp also has two 12AX7EH and two 12AU7EH tubes (the EH stands for Electro Harmonix), four line-level inputs, and 8 and 4 ohm output taps. Its snap-on tube cage is easily removable.

Normally, I wouldn't expect an affordable, Chinese-made integrated powered by tubes to be the last word in rugged construction or sexy cosmetics. The Cayin A-50T proved me wrong in both regards. The ruggedness of the Cayin's parts and construction is something I usually associate with multi-kilobuck electronics made in the US, and the amp is visually stunning. The curves of the chassis, faceplate, and removable tube cage suggest fine jewelry, not audio gear. Finally, the amp comes with generous warranties on parts and labor (three years), though only 90 days on the tubes.

I listened to the A-50T through Monitor Audio Silver RS6 loudspeakers, along with my usual analog and digital front ends, and did most of my listening in the amp's 35Wpc Ultralinear mode.

Listening
I was hoping to hear from the Cayin A-50T a richly holographic soundstage and an uncolored midrange, and it did not disappoint. Singer-songwriter Ashley Mounts' eponymous debut CD (private recording) revealed her angelic, holographically recorded soprano as she wove her elliptical melodies through an extensive vocal range against a somewhat minimal piano backdrop. On the male side, Tom Waits's voice, on his Mule Variations (LP, Anti- 8 65470 1), was appropriately rough, growly, and rich.

The Cayin's midrange reproduction was that of an amplifier able to resolve an extraordinary amount of inner detail for the price. On Tord Gustavsen's The Ground (CD, ECM 1892), every subtle low-level dynamic articulation and rich, resonant tone of Gustavsen's sparse, airy piano style was transparent and easy to follow, even in the softest passages of the recording. Fans of jazz woodwinds should be pleased with the Cayin's low coloration and linear and organic articulation of low-level midrange dynamics. I listened to Maria Schneider's big-band jazz recording, Allegresse (CD, Enja 9393-2), and noted: "Silky blend of saxophones with burnished blatty brass float on a bed of air."

THE CAYIN A-50T is OUR BEST SELLING TUBE AMPLIFIER at Puretone Audio - ALWAYS IN STOCK and ready for auditions!!!
Posted by Puretone Audio at 6:22 PM